KLAUS VOORMAN:  ANOTHER 5TH BEATLE- (All Articles ARE written BY ALAN CHRISMAN), copyright 2012-2015.( a Praveen Patel has tried to hack them and claim them,)

There are several people who could be called the 5th Beatle: George Martin, Brian Epstein, Neil Aspinall, Pete Best, etc. and I’ve written about some of these. But Klaus Voorman was also there at their beginnings and throughout their whole Beatles period and later played bass on several of their solo albums and as well as designed some of their iconic album covers. 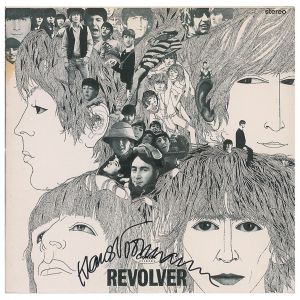 It was Klaus who first discovered the band in a tough Hamburg bar and told his roommate, Astrid Kirchherr, about them and she would create their whole look, which would soon conquer the world. It was Klaus who drew the distinctive Revolver cover.  It was Klaus Voorman who was part of John Lennon’s Plastic Ono Band when they played Live Peace in Toronto in 1969.  It was Klaus who played on and designed the cover for Ringo’s solo album of the same name.  He played on “Instant Karma”, and Lennon’s Imagine and Walls and Bridges, and Rock ‘n’ Roll albums, and was on George’s All Things, Material World, Bangladesh, and Dark Horse albums.

He was in Manfred Mann from’66-‘69 and played bass and flute on their hit,”The Mighty Quinn.” He was also a session musician for James Taylor, Carly Simon, Lou Reed, and Harry Nilsson and others. In 1979, he produced the German band, Trio, who had a hit with “Da Da Da.” And full-circle, he was asked by the remaining Beatles to design the covers for the 3 Beatles’ Anthologies covers in the mid-90’s. He also designed Bee Gees and others’ album covers as well.

In 2009, Voorman released his own solo album, A Sideman’s Journey with guests, Paul, Ringo, Cat Stevens, Joe Walsh,  Dr. John, Van Dyke Parks, The Manfreds, etc. In 2010, a documentary on him was made, All You Need Is Klaus.

This very talented, but unassuming musician and graphic artist too, was always a loyal Beatles’ sideman and lifelong friend.  As George said at The Bangladesh Concert, “ There’s somebody on bass who many people have probably heard about, but they’ve never actually seen him- Klaus Voorman.” A true 5th but unspoken Beatle too.